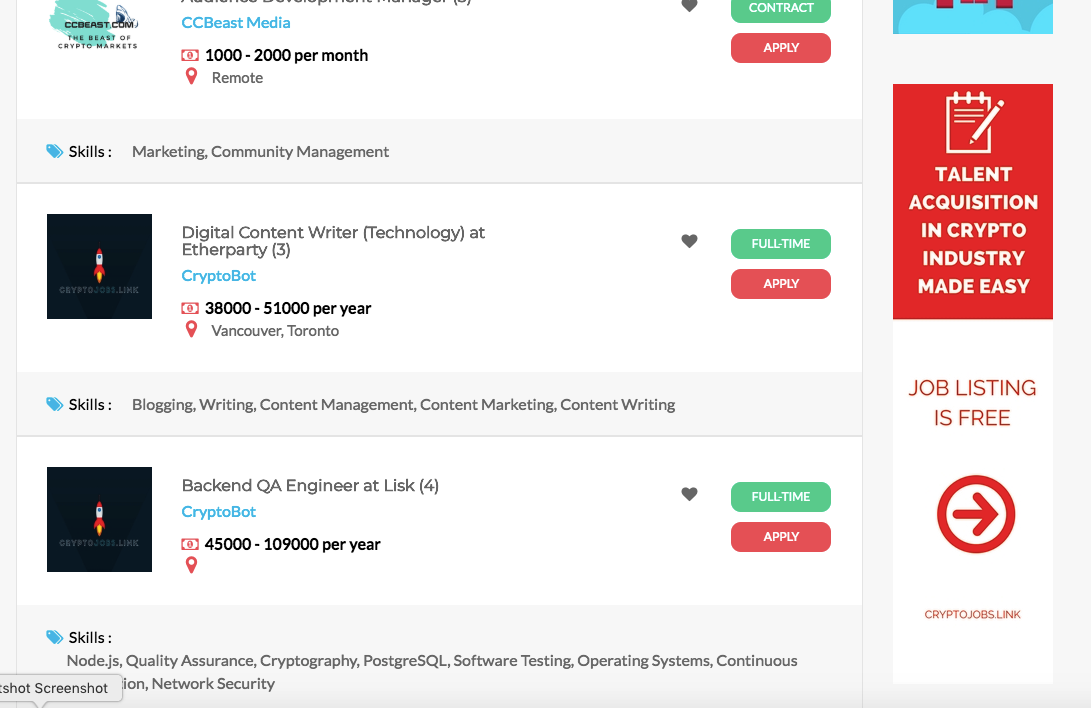 CryptoJobs.Link: a new job portal that meets the needs Crypto and Blockchain Enterprises

In 2017 more than $3.7 billion was raised in cryptocurrency ICOs and awareness of the medium has become global. Experts in the field are working in one of the fastest growing sectors worldwide. Consequently, the rise in popularity of cryptocurrency and Blockchain has skyrocketed beyond belief and Blockchain development is currently the second most desired job skill in the technology right now. It is estimated that for every Blockchain expert there are 14 employers waiting to hire him. In fact, in last year the demand for experts in cryptocurrency on online job sites incr5eased by 700%, making the market no longer a “niche” one. A lot of the increasing demand for Blockchain talent comes from startups, Bloomberg BNA reported. There are at least 1,520 Blockchain startups, according to AngelList. “People are desperate to get into this field because it’s the direction the technology is going,” said Katheryn Griffith Hill in a Bloomberg Law. Hill is a lead recruiter of Blockchain Developers, a staffing agency focused on Blockchain talent told Bloomberg Law. Upwork, a freelancing platform for freelancers, says Blockchain is its fastest-growing skill category, CNBC reported. LinkedIn says there has been a fourfold rise in bitcoin job postings and more people are adding bitcoin and related skills to their profiles. The former chief information officer at UBS and founder of Bussmann Advisory, Oliver Bussmann, explains that typical Blockchain developers are easily getting “£200,000 and £300,000” for an annual salary. Additionally, Bussmann details that he believes there are only 20,000 people worldwide with this kind of talent. “That’s not a lot. Demand for these skills is high. To get the talent you have to pay,” Bussmann tells the publication Financial News. The most demanded positions at the moment are; ICO advisors, Full Stack engineers, Front-End and Back-End developers in languages such as C++, GO, Rust, Python, JS, and Solidity in locations such as the United States, England, Singapore and Germany Big firms are also hiring Blockchain talent, often for in-house projects that operate somewhat as startups. In 2017, IBM had 400-plus Blockchain projects, employing more than 1,600 employees and had more than 150 Blockchain-related job openings in just October, according to the company. According to the predictions of Carlos Gomez, Senior Recruiter at CryptoRecruit, an Australian-based boutique recruitment firm for the Blockchain and Cryptocurrency industry, in the first half of 2018, the gap between the demand for crypto jobs and the supply is going to get bigger with the number of ICOs to grow at a larger rate than the number of people with the right set of skills. In the second half, the trend is going to begin to converge because the number of crypto enthusiasts will rise up, an important number of educational institutions are starting to offer crypto- and Blockchain-related courses with various formats aiming to skill up professionals in the industry and the release of a number of new technologies that will allow coders in major languages such as Python and JS to develop projects and Smart Contracts without the need to learn Solidity from scratch. CryptoJobs.Link developed by a small team of professional headhunters and business managers with a long history in various industries is aiming at solving the growing talent acquisition problem and its endless costs for crypto business owners. The major advantage of CryptoJobs.Link is the utilization of a strong network of partners to create high-quality job listings that reach relevant professionals in order employers to find truly motivated specialists passionate about cryptocurrency and Blockchain. With decades of combined experience in recruitment, CryptoJobs.Link fully understands the challenges that Startups and job seekers face. Cryptojobs.Link aims to develop a leverage and platform for Startup and Unicorns Hire in both crypto and Blockchain industries. Leader and founder of CryptoJobs.Link is Nikolas Kostopoulos. Nikolas has worked for years as an independent consultant for cryptocurrency and Blockchain businesses, gaining a priceless insight of the industry. He is a supporter of the Blockchain technology and the advantages that this can bring into our lives. Nikolas was schooled in policymaking and is a frequent speaker, moderator, and consultant specializing in Blockchain and talent retention in the industry. “We have identified the in-between gaps and aim to drive through them to bridge the gaps narrower as we move forward.” “By means of our uniquely built software and operations, starting up - and growing - businesses find untapped talent markets and conveniently locate the personnel they want for various roles in their enterprise.” Take control of your hiring. Register with CryptoJobs.Link today and start posting your roles. For more information about CryptoJobs.Link please visit the official site: http://cryptojobs.link

CryptoJobs.Link was "brewing" yet recognizing the challenges of Talent Acquisition that Startups and organizations faced in the cryptocurrencies and blockchain industry. We have identified the in-between gaps and aim to drive through them...

Made with - in Greece